Within 24 hours of its origination, about 100,000 Twitterati massively unfollowed Buhari, the ‘sleepy’ leader who has ‘remained unmoved’ towards the #ENDSARS protests. The following day, on 11th October 2020, the Inspector General of Police Mohammed Adamu dissolved the infamous Special Anti-Robbery Squad (SARS). But many believed the president did not give a hoot because it took days of online activism and nation-wide protests to get any response on a persisting headache as SARS.

Nigerian denizens, especially the youth, took the president’s silence as a lackadaisical attitude to address the protracted police brutality that has plagued the country for aeons. The youth, who once trusted in the superhero power of the Buhari presidency to curb corruption, impunity and injustices, are now so sure they have backed the wrong horse. Not with IGP, ending SARS for the umpteenth time while swiftly announcing another unit; Special Weapons And Tactics (SWAT), before anyone could take a breather. The Nigerian youth see SWAT as SARS With Another Title and no end to the police violence.

THE BUSINESS UNUSUAL
The genesis of the recent #ENDSARS online campaign began with a video of a Nigerian shot dead on 3rd October in Delta State by SARS officials. This, in turn, sparked a series of enduring protests in several states in Nigeria, with one rugged goal, ending SARS. Likewise, ten more deaths have occurred in the hands of SARS personnel since the beginning of the protests.

To make sure no one is above the peaceful protests happening in several states where the citizens are fervently demanding immediate police reform, no clear leader has emerged. The ploy makes it difficult for protesters to be targeted by the government for abuse as well. This unified front is an indication of how tired and angry the youth have become with unending abuse, extortion and humiliation in the hands of SARS, and how determined they are to put an end to it.

A recent development showed that Nigerian youths are unrelenting and will not allow the hijacking of a collective effort. For instance, one of the early starters of #ENDSARS in 2017, Segun Awosanya exhibited ‘rightful’ indignations in a deleted tweet for being left out of a recent zoom call with government representatives to deliberate a way forward. His annoyance got him cancelled by followers who unfollowed him en masse citing activism grandstanding. But his concern seemed to have been about averting a takeover witnessed in the previous Occupy Nigeria protests. It appeared there is a glaring misunderstanding somewhere. Where privileged elites or public/civil servants have made the gaffe of thwarting the protests, they have been met with online shaming and calls for international travel revocations.

Unfortunately, adding to the difficulties faced by many this year, from a global pandemic to economic collapse, and the ensuing emotional vulnerabilities, more is still at stake. From #BlackLivesMatter protests reemerging when George Floyd was murdered by the US police to the Namibian netizens calling for the end of the prevalent femicide through the #ShutItAllDown campaign, we are indeed in daunting times. Furthermore, gender-based violence, educational stagnation, extremism and gross abuse of the police units like SARS continue to affect the tranquillity of the Nigerian citizens.

More so, how a Special Anti-Robbery Squad ended terrorizing all and sundry with such impunity for years in a democratic country is an eyesore. Turning into authorized criminals instead of carrying out their assigned duty. Amnesty International called out this gross abuse of human rights in their 2016 report to no avail. No one was prosecuted up until now that the Nigerian Governors’ Forum is calling for the prosecution of the criminals within the Squad.

By and large, nation-wide protests, which started the 2nd week of October (after days of ignored cyber outcries), sparked international outrage with several nonviolent solidarity demonstrations occurring in the USA, Canada and the UK. The protest garnered over 28 million tweets instantly with many activists and celebrities amplifying Nigerian netizens’ voices all over the world. Crowdfunding to ensure protesters are not left stranded or hungry or without data or medical care became part of the protest’s necessities. Like in the case of Laraba beaten to a pulp by the Nigeria police during the rally, a newly formed feminist coalition was able to secure funding for her treatment.

The feminist coalition that mobilizes marches daily has raised N62.6 million thus far and has disbursed N13 million to the protest in different capacities. This is a strong young-women-led coalition displaying integrity, accountability and a firm commitment to end police brutality in Nigeria. Concerned people and businesses from home and aboard have contributed to the crowdfunding of this organic protest. The coalition is also crowdsourcing for service provisions such as pro bono lawyers to represent arrested protesters while persisting in revolutionizing the Nigerian Police Force.

THE PERVASIVE THEATRE OF ABUSE 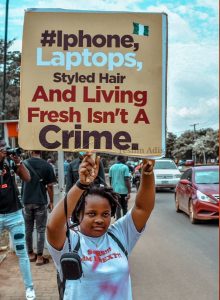 It is to the extent that the police under SARS authority will look for anything to incriminate any youth stopped for questioning. If you are tech-savvy, flashy, trendy, or wear male-piercings, dreadlocks or tattoos, you’re doomed. Being you is a recipe for harassment, an insinuation of crimes and the accusation of homosexuality to exploit, harass and intimidate. In a country where life is already hard, the police sure make it harder by sucking at doing their job. The job to protect and defend is reserved for the elite while the masses are getting oppressed daily. Branding the entire cohorts of diverse youth criminals, soiling their reputations glocally while destroying their creativity and patriotic pride is demoralizing.

The Nigeria police force, which ought to have undergone an overhaul, has continued to survive on the life support of misconducts. Despite the passing of a progressive bill by the senate in 2019 to repeal and re-enact the Police Act of 1943, which still reeked of colonial legacy, no one was clear as to the way forward. But suddenly the outcry of the protesters awakened the ‘sleepy’ leadership to their forgone responsibility. It is announced that the Buhari administration through his Presidential Panel will honour the recent meeting held with the Nigeria stakeholders involving some of the protesters to attend to their five demands. These demands include the immediate release of arrested protesters, a setting up of Independent Investigation Panel into the human rights violations of SARS and other police segments, and the psychological evaluation of SARS officials before redeployment. While this appears like a breakthrough, more is needed. 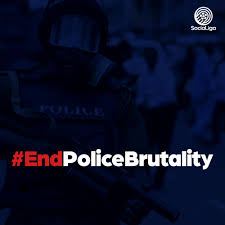 TRANSFORMING THE MURKINESS
Efforts have to be put in place to turn police job into a prestigious and lucrative one, instead of a hand-me-down and safe-me-from-poverty mentality. In Addition to the need for a better salary scale and treatment of the police staff, deconditioning and reprogramming training is necessary for them to truly see their job as a career choice: to protect and defend the citizens. Also, the political will to sincerely reform the police force to combat real crimes and not remain a nemesis to the entire nation rests squarely on the shoulders of the leadership.

The ongoing effort at the security sector reform and the review of the inherited colonial decree still in use by the police have to coincide with attitude reform, psychological assessments, and police salaries and benefits evaluations. It is a situation needing a thorough approach that is holistic and sustaining to transform. The place of humanity in our interaction as we engage in a constructive change to end longstanding impunities, imbalances and injustices in our structural, relational and cultural problems will so much launch us into a cohesive living.

Delving into the root causes and underlying problems of crimes in Nigeria with a very holistic approach will not only stop police’s rash and crash approaches but also will allow for sustainable solutions to these lifelong problems. Lip service or a short–term, fix-it-now, top-down solutions that have not worked for the betterment of the country cannot continue to be the go-to tactic for a complex problem as this. We cannot continue to forgo our humanity or the Ubuntu of our existence when our method to life and its attendant conditions ought to stem from a fountain of mutual respect, love, and compassion. Finally, If we fail to embrace overarching reform, it will not be long before SWAT begins steering again, the vicious wheel of abuse previously engineered by their predecessor SARS.